At the end of the year I like to take a look at the posts I have written.. I see some common themes and a few new ones. Here are some excerpts from my favorite posts by month:
If you are so inclined.. please let me know if any of these were particularly helpful to you.. today or yesterday when you first read them.
3 comments:

I am in awe of the way that God entered the world. I would have thought that He would have come: 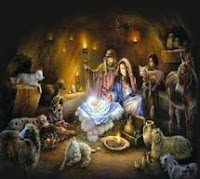 It reminds me that the scriptures tells us:

Have this mind among yourselves, which is yours in Christ Jesus, who, though he was in the form of God, did not count equality with God a thing to be grasped, but made himself nothing, taking the form of a servant, being born in the likeness of men. And being found in human form, he humbled himself by becoming obedient to the point of death, even death on a cross. Therefore God has highly exalted him and bestowed on him the name that is above every name, so that at the name of Jesus every knee should bow, in heaven and on earth and under the earth, and every tongue confess that Jesus Christ is Lord, to the glory of God the Father. (Philippians 2:5-11)

The link between the cradle and the cross in inextricable. Jesus came to us as a Sacrificial Lamb.. He lived a life of suffering.. infinite divine existence willfully constrained to a temporal human life.. I am in awe of Jesus.

This week I heard a new definition of pride. A local pastor said that pride is thinking that you are better than another.. he said that when we are impatient with a waitress or a person at the grocery checkout we reveal our pride.. we think that we could and would do the job better even though we believe that those jobs are "beneath us".

Aren't you glad that Jesus is not proud! He came in humility.. lived a humble life.. and died a humble death. The scripture says that because of His humility He bears a name that is matchless in all of heaven and earth.

Would you consider honoring Him today by dedicating yourself to living a life of humility?
2 comments:

Every time I hear this song from the rock musical Godspell I flash back to a time in the early 1970s when my first wife Ellen was blind and I was hurting. Each time this song would come on the radio I would cry.. I was beside myself.. I hurt and didn't know what to do with my pain. Years later I would take my pain to the cross of Christ.

Little did I know that the heart of this song came from this prayer:

O most merciful Redeemer, Friend, and Brother,
May I know thee more clearly,
Love thee more dearly,
And follow thee more nearly:
For ever and ever.

This "translation" of the New Testament is billed as "A scripture project to rediscover the story of the Bible" "As retold, edited, and illustrated by a gifted team of writers, scholars, poets, and storytellers". Words like "holistic", "beautiful" and "sensitive" are used in the preface to describe it. The Voice is the culmination of Chris Seay's vision for a different kind of biblical translation that puts the bible into everyday language and uses common English words that can be understood by the average Joe on the street.
On face value this seems to be a noble endeavor and one that may work for many Christ followers that flow in the Emergent stream of Christianity. I say that because prominent among the contributors is emergent sensei Brian McLaren. So I guess before I looked too much into the book I was already on my guard about how The Voice would be "translated".

Before you throw any emergent stones at me you need to know that I generally like much of emergent theology and my critique is not about that stream of Christianity. Mostly my thoughts are around the idea that a "translation" of the bible should be precise.. if it is not then it should be called a paraphrase. So with that backdrop I will give you a few of my impressions of The Voice.
So, given this, you might ask if I would recommend The Voice to others.. well.. maybe if I had more time to thoroughly study it along side of other translations? I'll leave that for other smarter folks :)

I think that there is a place for works like this one. I often enjoy reading from The Message.. interesting how these types of works use "The" to preface the title.. and I think that this work falls into a Message category. What I am a bit concerned about is the people that did the translating. I am uncomfortable with non-scholarly folks "translating" the scriptures.. especially those with a distinct and overt theological bent. In closing I thought that I would simply quote a few familiar passages from John 3 and let you decide if you like it or not.

"I tell you the truth, if someone does not experience water and Spirit birth, there's no chance he will make it into God's kingdom." (John 3:5 The Voice)

"For God expressed His love for the world in this way: He gave His only Son so that whoever believes in Him will not face everlasting destruction, but will have everlasting life." (John 3:16, The Voice)
8 comments:

Kim Allen offers this observation about the nature of worry:

Worry starts when we project into the future. The mind searches for and examines all the angles it can find related to worst-case scenarios. We rehearse how to respond to what might happen—I'll do this, then she’ll say that, then I'll say this. Before we know it, it's 3:00 in the morning. All this self talk is not only unproductive; it's exhausting!

I resonate with that.. I often engage in this unproductive and exhausting kind of thinking. Can you relate?

It reminds me of how the scripture enjoins us to take thoughts captive. That said, I think that it is not a matter of one thought defeating another.. it is not simply thinking positive thoughts and hoping for the best.. it is not denying the painful realities of our life. It is simply trusting the Lord with all of our hearts and not leaning on our own understanding.

In difficult times it is good to remember that the scripture calls us to:

Be anxious for nothing, but in everything by prayer and supplication with thanksgiving let your requests be made known to God. And the peace of God, which surpasses all comprehension, will guard your hearts and your minds in Christ Jesus. (Philippians 4:6-7)

Isn't it interesting that the apostle begins with anxiety and ends with peace.. begins with the head and ends with the heart. When we pray we take those things that worry us and trouble our heads to the Lord.. through prayer we cast them on the Lord. In return, the Lord may not fix things.. He may not heal that "terminal" diagnosis.. but He will give of peace of heart and mind.

Today if you are struggling.. if worry has overcome you.. if you often entertain worst-case scenarios.. try going to the Lord and engage Him with your heart. Yes, pray with your heart and not your head.. try to not allow your head to dominate your prayers.. so often prayer can just be another way that we worry. Pour your heart out to the Lord.. tell Him what is going on.. entrust Him with your cares and worries.. and let Him fill you with His peace. Cast your cares because He cares.

Humble yourselves, therefore, under the mighty hand of God so that at the proper time he may exalt you, casting all your anxieties on him, because he cares for you. (1Peter 5:6-7)
2 comments:

Humility is not an Option

I recently opined this at Barbara's place:

Do you find this to be true? When I think about humility I think of men like the Apostle Paul. He was a tough religious man before Jesus appeared to him and asked this question:


“Saul, Saul, why are you persecuting me?”

Have you ever been humbled like this? Before Jesus appeared to him Paul (aka Saul) zealously persecuted Christians. The scriptures say that he "was ravaging the church, and entering house after house, he dragged off men and women and committed them to prison." (Acts 8:3). I wonder what it was like for Paul when Jesus showed up and confronted his misplaced zealotry? It had to be humbling and maybe even humiliating to know that he and his "ministry" was fighting God.

Do you find comfort in Paul's story? It helps me to know that God humbled Paul in this way. Sometimes humility really looks like humiliation - can you relate.. I can. So often in my life I have felt like an absolute failure.. so often my pride (especially the religious variety) and my judgmental words have returned to me with humiliating results. It reminds me of this verse:


Clothe yourselves, all of you, with humility toward one another, for “God opposes the proud but gives grace to the humble.” (1Peter 5:5b)

Pride is not an option for a believer.. and neither is humility. We can either clothe ourselves with humility or find God humbling us.. and the latter often resembles humiliation. So what does humility look like? Maybe it looks like love? How about this definition?

In truth humility is an expression of love - for God and each other. When we have pride we do not love.. when we love we are humble. Consider the love of Jesus:


Have this attitude in yourselves which was also in Christ Jesus, who, although He existed in the form of God, did not regard equality with God a thing to be grasped, but emptied Himself, taking the form of a bond-servant, and being made in the likeness of men. Being found in appearance as a man, He humbled Himself by becoming obedient to the point of death, even death on a cross. (Philippians 2:5-8)

For Jesus, humility resulted in "death on a cross".. why would we expect it to look any different for us?
14 comments:

The 8th chapter of Romans is one of my favorites. In this passage the Apostle Paul says some insightful things about the relationship of the heart and the head. Here is what I get from it:
What this passage doesn't speak to specifically is how a person can be a Christian (i.e have the Spirit) and not walk in the Spirit. I have written on this topic a few times so I will not belabor it but simply say that it is a matter of which is stronger.. your innermost or outermost being. I think that to be strong on the inside requires two things: feeding and exercise.


Feeding: Growth of any kind requires food.. this is the intake side of life. Spiritual growth requires spiritual food.. I will simply call this food "truth". This truth food comes to us in many forms - personal study, teaching, counseling and prayer.. just to name but a few. For this food to be effectively digested it must be received in humility.. without humility the food will not accomplish what is is meant to do - provide the means for growth.