Some who do not believe ...

It is the spirit that gives life; the flesh is useless. The words that I have spoken to you are spirit and life. But among you there are some who do not believe.” For Jesus knew from the first who were the ones that did not believe, and who was the one that would betray him. And he said, “For this reason I have told you that no one can come to me unless it is granted by the Father.” -John 6:63-65 NRSV
It is an age old debate. Does God grant the ability to believe to just a few or does that ability lie within each of us? Doubtful in these few sentences that I will sway you one way or another on that question. Yet it is clear that John was thinking about Judas Iscariot when he wrote about how people could be outwardly religious yet inwardly unbelieving.

Interesting how John only knew this after Judas betrayed Christ. It is like he was telling us that no one but Christ knows who truly believes. The point was not to answer the question that I posed above but to speak to each of us about believing the words that give us "spirit and life" and to allow ourselves to be drawn and led by the Spirit.

Father, grant us to come to you today. Renew us that we might receive your life and your Spirit.

It is the spirit that gives life ...

When many of his disciples heard it, they said, “This teaching is difficult; who can accept it?” But Jesus, being aware that his disciples were complaining about it, said to them, “Does this offend you? Then what if you were to see the Son of Man ascending to where he was before? It is the spirit that gives life; the flesh is useless. The words that I have spoken to you are spirit and life. -John 6:60-63 NRSV
I wonder what the disciples were saying to each other when Jesus spoke to them of eating his flesh and drinking his blood. To the carnal mind his words must have seemed cannibalistic in nature. Yet the words of Christ were never ever meant to be taken carnally. Eating and drinking in Christ has always been about taking his Spirit deep within.

Don't you love how Jesus connects life with spirit? When he speaks of his words being spirit and life he is teaching us what life is all about. What being human was meant to be from the very beginning. Being human has never been about human flesh but about the Spirit of God living in human flesh. To genuinely live is to live from a place deep within.

We long to see you ascending Lord. Open our eyes to what your Spirit is doing all around us.

The one who eats this bread will live forever.

The Jews then disputed among themselves, saying, “How can this man give us his flesh to eat?” So Jesus said to them, “Very truly, I tell you, unless you eat the flesh of the Son of Man and drink his blood, you have no life in you. Those who eat my flesh and drink my blood have eternal life, and I will raise them up on the last day; for my flesh is true food and my blood is true drink. Those who eat my flesh and drink my blood abide in me, and I in them. Just as the living Father sent me, and I live because of the Father, so whoever eats me will live because of me. This is the bread that came down from heaven, not like that which your ancestors ate, and they died. But the one who eats this bread will live forever.” -John 6:52-58 NRSV

Some interpret this passage in a eucharistical fashion. These believe that we actually partake of Jesus' flesh and blood during communion. Even so, it is good to remember the context of this passage is the teaching that Jesus is the bread of life. And Christ was speaking in the present tense and not about a future communal meal.

I love how Jesus connects abiding in Him with nourishing our souls with his very being. Instead of speaking about an occasional eucharistic meal, the Lord reminds us that life is not about physical manna but about spiritual bread. In doing so he points us to an eternal relationship with him that transcends earthly confines and earthly bread.

Help to abide in you today Lord. Help me to sense your presence and gorge myself on eternal bread.

I am the bread of life.

I am the bread of life. Your ancestors ate the manna in the wilderness, and they died. This is the bread that comes down from heaven, so that one may eat of it and not die. I am the living bread that came down from heaven. Whoever eats of this bread will live forever; and the bread that I will give for the life of the world is my flesh.” -John 6:48-51In ancient times Israel sojourned in the wilderness and God provided heavenly manna for them. Each morning the Jews would wake up to a substance that they could pick and bake. It was and is a lasting example to us of the faithfulness of God to his people. It speaks to me of how our relationship with him requires us to seek out spiritual nourishment.

We are not far into the ministry of Christ and he is already teaching us about how he will offer his body "for the life of the world". Notice that he speaks of both those who eat and the world in general. It reminds me that a stomach is not filled by looking at the bread but by eating it. Spiritual hunger is not filled by assenting to God but by engaging with him.

Help us Lord to seek you each day and to find ways to engage with you in our daily living.


... this devotion is part of an ongoing series on the Gospel of John.
3 comments: 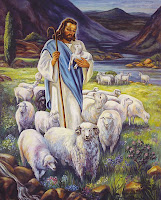 Ever think about that verse in Psalms 23 that speak of God's rod and staff comforting us? I wonder if the rod and staff can be somewhat representative of providence and sovereignty? Ann and I were talking yesterday and I found myself saying something like this: "I think that I believe more in the providence of God than in the sovereignty of God."

I want to unpack that thought in this post and maybe reflect a bit on how those two big words relate to my life. Firstly I have to say that I believe in both terms as described here:


Providence: the foreseeing care and guidance of God over His creation.

Sovereignty: God's absolute right and ability to do all things according to his will.

I think that these terms sometimes get us in trouble when we read too much into them. For example - we can error if we believe that because God is sovereign He wills bad things to happen us. We can also mistakenly take His providential care for granted thinking that our actions are not important because He can use bad stuff as well as good.

Getting back to my thinking about these words.. when I think of them two passages of scripture comes to mind. The first is Satan's interaction with God in the first two chapters of Job - here we see that God allows bad things to happen to one of His followers.. in this we see that nothing happens apart from God's permissive will.. because He is sovereign even Satan has to ask permission to do bad things.. it is a comforting thought but not too comforting when you understand that all of Job's children died.

When I think about Providence my mind wanders to the eighth chapter of Romans and the verse that is at the heart of what is means to believe in the providential nature of the Lord:


We know that God causes everything to work together for the good of those who love God and are called according to his purpose for them.

Life happens.. bad things happens.. look at Job.. nevertheless God is at work in our situations.. even using the bad stuff to accomplish His purposes. I find comfort in that verse.. I find comfort in God's providence. I also find comfort that Satan has to ask God for permission to attack me - but not that much.. I'd rather that God prevented instead of permitted Satan's actions.. I am a wimp like that. :)

Another verse that strengthens me and kind of ties these two words together is found in the tenth chapter of First Corinthians:


The temptations in your life are no different from what others experience. And God is faithful. He will not allow the temptation to be more than you can stand. When you are tempted, he will show you a way out so that you can endure.

I like this verse.. the ornery side of me says that people who do not have difficulties must be weak people that cannot stand up under temptation.. but the gracious part of me understands that God's providence and sovereignty is a package deal. His providence helps us when His sovereignty allows bad stuff to happen to us.

I still like His Providence more though.. it comforts and blesses me to know that He is there during the difficult times that His sovereignty permits.


Another blast from the past - first posted in March 2010.
6 comments: