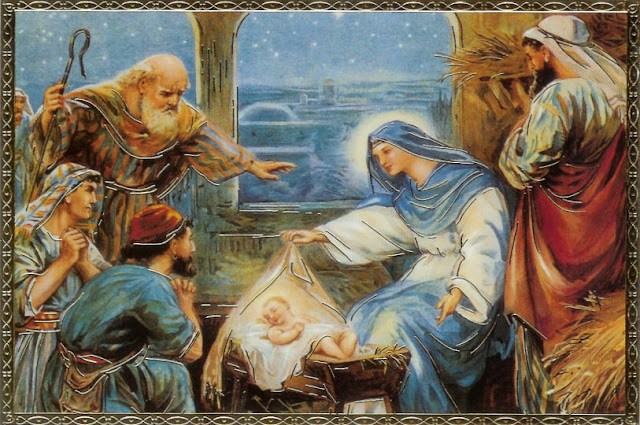 She gave birth to her first son, wrapped him in cloths and laid him in a manger---there was no room for them to stay in the inn. There were some shepherds in that part of the country who were spending the night in the fields, taking care of their flocks. An angel of the Lord appeared to them, and the glory of the Lord shone over them. They were terribly afraid, but the angel said to them,


"Don't be afraid! I am here with good news for you, which will bring great joy to all the people. This very day in David's town your Savior was born---Christ the Lord! And this is what will prove it to you: you will find a baby wrapped in cloths and lying in a manger."

Suddenly a great army of heaven's angels appeared with the angel, singing praises to God:


"Glory to God in the highest heaven, and peace on earth to those with whom he is pleased!"

When the angels went away from them back into heaven, the shepherds said to one another,


"Let's go to Bethlehem and see this thing that has happened, which the Lord has told us."

So they hurried off and found Mary and Joseph and saw the baby lying in the manger. When the shepherds saw him, they told them what the angel had said about the child.

All who heard it were amazed at what the shepherds said.
No comments:

There is no Fear in Love

Don Hendricks, my online friend, recently wrote something on his blog that I so agree with concerning the relationship between God and His people. Here it is:

I have a pet peeve about some popular ways we live out Christmas truth. It seems that many still live in a relationship with the Old Covenant. As I preach through the prophecies of Isaiah I see tremendous changes promised....but many are more interested in the God who punished His old covenant people for their sins.

We are not in a community that is punished for being out of line, for the line, ie. the law, was hung on the cross. There is still an inevitable sowing and reaping in our moral decisions, but God in Christ is for us, for all of us. Peace on earth is about God understanding we are pretty much hopeless in the perfect obedience department. Christ became God's perfect obedience, and his faith saves us. It's so simple that we simply miss the core of the good news. God loves sinners, sent His Son to save us.

Thinking about that I am reminded about a Facebook dialog I recently had with an old friend of mine where I responded to his assertion that:


"I should flee with Godly fear from all personal wrong-doing lest I come under his righteous judgment. Thus, the fear of the Lord keeps me from evil."

I pointed out to him, and I do to you today, that God is love and there is no fear in love.

A proper understanding of how the fear of the Lord evolves resembles that of an earthly child and their father. A child's healthy relationship with their (seemingly larger than life) father "begins" with fear. But a healthy relationship does not stay in fear. A grown child should honor and respect their father but should not fear him. So it is understandable, in that context, why a young believer would fear God. But as the believer matures the fear looks more like an awe filled honor and respect of their heavenly Father.
7 comments:

Dedicated for those who are struggling in this holiday season. I join with you in affirming:


In Jesus name we press on!
3 comments: