The Ordinary Presence of God 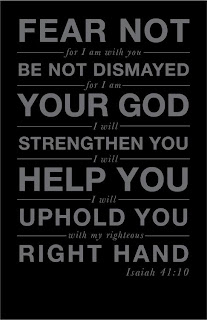 Much is made these days in some circles of the manifest presence of God. Some would discount the ordinary presence of Jesus preferring a more mystical version of it. In one of his last words on earth Jesus comforted us with these words:

"surely I am with you always, to the very end of the age"

He also assured us that the Holy Spirit would be in our lives to lead us, comfort us and be with us always. These assurances from the Lord helps me to better understand the words of Isaiah in the image on the left. And Isaiah's words provide context to what God's presence looks like in our lives. Knowing that God is with me frees me from fear. When I am tempted to be dismayed I find strength when I lean into His presence. In some of my darkest days I have felt his presence upholding me. His righteous right hand picks me up when I fall and causes me to stand. So while I have experienced the mystical (and almost tangible) presence of God in my life, I am so thankful that God is with me when I least sense Him. I am so thankful for the ordinary presence of God.


Another blast from the past - almost 5 years ago! The good stuff is in the comments! 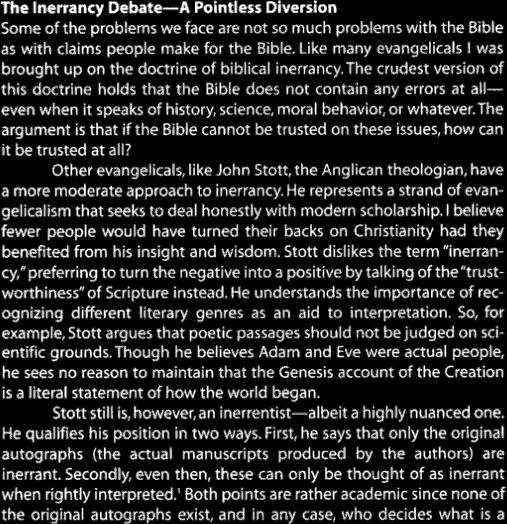 My wife Ann is reading (and I am reading excerpts from) the post-evangelical by Dave Tomlinson. To the left is a page that I found to be an interesting one. You can read the next page here.

I am interested in your thoughts on this and would like to have a dialog around scriptural inerrancy. So feel free to leave me a comment or perhaps pose a question for discussion. The more interaction the better :)

Another blast from the past. This one from November of 2008 ...
Ever wonder about this whole idea of time? The longer I live the more I realize how much of my life is preoccupied with this idea of time. I became impatient a few hours ago because my wife was running a bit slow and didn't seem to be "on time". I wonder what time looks like when God's kingdom comes? Ever think about this whole idea of "eternity"?
It says in Ecclesiastes 3:11 that:

He has made everything beautiful in its time. He has also set eternity in the hearts of men; yet they cannot fathom what God has done from beginning to end.

I found it interesting how this verse blends elements of time and eternity. Ever think about how time is a part of creation? Ever wonder what existence will look like after we die? Ever think of living in a timeless world? Hard to get your head around isn't it? Could it be that Heaven is a place where time does not exist?

I think that one of the keys to time is understanding that our view of time is different than God's perspective. We get a glimpse of it when Peter writes:

Peter is not giving us a heaven-earth time conversion table.. he is saying that God's view of time is different than ours. I think that time is an earthly concept.. God exists outside of time.. it is why the writer of Hebrews says:


Jesus Christ is the same yesterday and today and forever.

It speaks to the agelessness of heaven.. Jesus doesn't age.. He is the same.. He doesn't get smarter.. He is all wise.. interesting isn't it?

So.. you might ask.. who cares about time.. how can understanding this help me? I think that we can develop patience in our lives when we live understanding that His kingdom is a timeless one. Whether He chooses to act today or tomorrow is somewhat irrelevant when we live in a timeless kingdom. I think that a preoccupation with time and timing is evidence that we are living in the visible kingdom and not His invisible kingdom.

The Apostle Paul writes one of the most amazing verses about time:


So also we, while we were children, were held in bondage under the elemental things of the world. But when the fullness of the time came, God sent forth His Son, born of a woman, born under the Law, so that He might redeem those who were under the Law, that we might receive the adoption as sons.

Again we see that God is mindful of time but not bound by it. In His sovereignty He sent Jesus at the perfect time. Interesting that Paul says "the fullness of the time".. as if God was peering into this time-bounded dimension where He saw the past and the future and determined the right time for Jesus to be born.. mind boggling isn't it?

When we live a kingdom oriented life we live a life filled with patience.. a life unoccupied and obsessed with time. We understand that God operates outside of time and brings things to pass in the fullness of time.

Another blast from the past. Some thoughts that I shared in January 2005 ...

My pastor recently mentioned fatalism in a Sunday morning message. It caused me to look the word up:

Fatalism: Acceptance of the belief that all events are predetermined and inevitable.

This definition really challenges me because it too closely tracks with something I have often called faith. In this definition my 'que sera, sera' attitude is revealed as a fatalistic view of life and my heart is laid bare having not really exercised faith in God but having given in to this dark thinking. One way that fatalism reveals itself in my heart is when I don't pray thinking that if God wants it to be He will make it happen and I really don't have a part.

I think that some of this thinking began 11 years ago when my first wife died. I prayed for her healing for four years and, in the end, she died - and ultimately my prayers were seemingly unanswered. This event brought a sickness into my heart ... part of me gave up the fight ... life became difficult and my prayer life became more about the sovereignty of God (my spin on fatalism) and the power of God. I found myself talking to God in terms where there was no risk.

In 1999 I was diagnosed with an arthritic condition that caused me to be somewhat disabled activity-wise ... my heart died a little more. A few years later my new wife was diagnosed with Multiple Sclerosis - my heart once again sank and this fatalistic 'Sovereignty of God' view gained more control of me.

So what exactly is the difference between true faith in God's sovereignty and a fatalistic view. I think that we can find the answer in the outcome of each. In essence faith causes us to press in, seek, and overcome - fatalism causes us to give up. Faith inspires hope in tomorrow while fatalism offers only fear. Faith affirms God's love for us ... fatalism embraces the worst of our fears.

Fatalism is very subtle because it can mask itself in very religious ways. We can mistake a sort of spiritual paralysis as "waiting on the Lord". We can be immobilized by fear and think that we are living in dependence on God ... all the while not taking risks ... not stepping out in faith ... thinking that God will move when even when our hearts are dark with fatalism. You know, when our faith is focused on the whole of God - His sovereignty, His Power and His Love - we can have a healthy faith. When we focus on one aspect of God, like His sovereignty, we develop an unhealthy faith. Our challenge today is to pray ... pray that our hearts would be free of fatalism and filled with faith.


Tuesday I presented the Christus Victor view of the cross. The following view is sometimes called Penal Substitution.

St. Anselm of Canterbury first articulated the satisfaction view in his Cur Deus Homo?, as a modification to the ransom theory that was postulated at the time. The then-current ransom view of the atonement held that Jesus' death paid a ransom to Satan, allowing God to rescue those under Satan's bondage. For Anselm, this solution was inadequate. Why should the Son of God have to become a human to pay a ransom? Why should God owe anything at all to Satan?

Instead, Anselm suggested that we (sinful humans) owe God a debt of honor: "This is the debt which man and angel owe to God, and no one who pays this debt commits sin; but every one who does not pay it sins. This is justice, or uprightness of will, which makes a being just or upright in heart, that is, in will; and this is the sole and complete debt of honor which we owe to God, and which God requires of us." This debt creates essentially an imbalance in the moral universe; it could not be satisfied by God's simply ignoring it. In Anselm's view, the only possible way of repaying the debt was for a being of infinite greatness, acting as a man on behalf of men, to repay the debt of honor owed to God. Therefore, when Jesus died, he did not pay a debt to Satan but to God, His Father. In light of this view, the "ransom" that Jesus referred to, in the Gospels, would be a sacrifice and a debt paid only to God the Father, in behalf of "many".

Anselm did not state specifically whether Jesus' payment of debt was for all of mankind as a group or for individual people, but his language leans in the former direction. Thomas Aquinas' later developments specifically attribute the scope of the atonement to be universal in nature.

Following are a few counterpoints that Derek Flood presents on his blog:
As I said before, I am drawn more to the Christus Victor view of the cross.

Which view attracts you more? What aspects of that theory appeal the most?