Then I Shall Live

I then shall live as one who's been forgiven.
I'll walk with joy to know my debts are paid.
I know my name is clear before my Father;
I am His child and I am not afraid.
So, greatly pardoned, I'll forgive my brother;
The law of love I gladly will obey.

I then shall live as one who's learned compassion.
I've been so loved, that I'll risk loving too.
I know how fear builds walls instead of bridges;
I'll dare to see another's point of view.
And when relationships demand commitment,
Then I'll be there to care and follow through.

Last month I wrote about a human-angelic experience I had in an ICU right before my first wife Ellen passed away. Today I bring you a great and inspirational story from my good friend Eileen.

I was flying home from a great week with my Florida family. My emotions were mixed as we said good-bye. It was hard to leave them, but I was really ready to be home again; ready to be back to my husband and my own house. 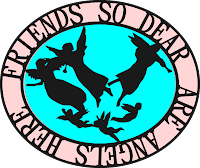 I’ve flown alone before and everything has always gone well. Still, each trip brings a bit of anxiety. Being wheelchair bound, I am totally dependent on airline and airport personnel to get me on, off, and down long concourses to my next plane. I always wonder, “What if I miss that connecting flight…?” I was about to find out.

My first flight had a problem docking to the jet-way. Many minutes were lost and time was already short. The courier pushing my wheelchair hurried my through the airport as fast as he could, but I was too late. I missed my flight! The courier took me to Customer Service. The next available flight home wouldn’t leave until the following morning. They offered me a hotel room, but without someone to help me, that was an impossible prospect. I knew I needed to stay in the airport.

So, there I was, sitting at my morning gate in a manual wheelchair that I was not strong enough to move. I was confident that I would be OK; that I could sit there for 12 hours and wait patiently. I called Marvin to tell him my situation. Then I began to talk to God. I asked Him to send me angels to keep me company.

Marvin called Jason (Eileen's son) with the news. Jason and Nicole prayed. Nicole asked God to send me angels. Marvin called his Mom. She prayed with Marvin over the phone and asked God to send me angels. Then God began to move! Marvin’s Mom called her niece, Martha. Martha called her daughter, Melissa, who lives in southern Georgia. Melissa called her friend, Missy, who lives in Atlanta. All these followers of Jesus were determined to find a way to help me. Phone calls followed into the night as they went through possibilities.

It was Missy and her friend, Christine, (two women I had never met) who finally drove an hour to the airport late that night. Through sheer determination they finally found someone who could and would find me and push me out of the secured area to them. Missy and Christine were my angels. God had answered our prayers.

Missy and Christine are both mothers of young children who sacrificed a night’s peace and rest and their own priorities to answer God’s call and meet my needs. They spent the night with me, helping me to the bathroom, providing food, and having a lot of fun conversation. To me it seemed like a party! We had fun! In the morning they got me back to my gate before they said good-bye and returned to their families. After they’d gone I realized that I didn’t even know their last names.

It never occurred to me before that night that God uses people to do the angel-thing sometimes. It’s a lesson I want to remember. I’d really like the privilege of being someone’s angel someday. I hope that when the opportunity comes, I will gladly make the sacrifice. Thank you, Missy and Christine!
3 comments:

Life as a Prayer

Instead of merely saying a prayer..
perhaps our lives can be prayerful expressions to God.

Instead of merely giving a heavenly thanks..
perhaps our lives will be filled with thankfulness.

Instead of merely asking for divine forgiveness..
perhaps our lives can be lived from forgiving hearts.

Instead of merely singing songs of worship..
perhaps our lives will be transformed in living worship.

Instead of merely interceding for others..
perhaps our lives can be poured out in service to them.

Instead of merely petitioning God for grace..
perhaps our lives will be display glorious graciousness.

Instead of merely loving God in a prayer..
perhaps our lives can be rooted in love for God and others.

Instead of merely praying..
perhaps we will live life as a prayer.

Please visit The Prayer List and pray with me.
4 comments:

The Plans of Our Heart

The sixteenth chapter of proverbs is filled with instruction about our hearts. We are told to submit our plans to the Lord and watch Him establish our steps. The chapter contrasts those who are arrogant in heart with those who are humble in heart.. those who do worthless acts and those who are filled with acts of wisdom.

"The plans of the heart belong to man, but the answer of the tongue is from the LORD. All the ways of a man are pure in his own eyes, but the LORD weighs the spirit. Commit your work to the LORD, and your plans will be established." (v1-3) "The heart of man plans his way, but the LORD establishes his steps." (v9)

In these verses we see a contrast between the roles of man and those God. They seem to indicate that it is good for a man to have plans as long as man realizes that God has the last word on our plans. Also present is the idea that we do not always know our motives.. sometimes God will reject our plans if our motives are not right. I love how it says that God's goal is to establish those plans that we have submitted to Him. In these verses we see how we and He work together to brings His plans in our heart to pass.

"The LORD has made everything for its purpose, even the wicked for the day of trouble. Everyone who is arrogant in heart is an abomination to the LORD; be assured, he will not go unpunished. By steadfast love and faithfulness iniquity is atoned for, and by the fear of the LORD one turns away from evil. When a man's ways please the LORD, he makes even his enemies to be at peace with him." (v4-7)

Again we see that the Lord is cognizant of each human heart. He wants to be in relationship with each of us yet some spurn Him and pursue wickedness instead. In arrogance humans reject the Lord who loves them and desires to forgive them and share His love with them. To such that return God's love to Him in worship He gives atoning blessings of peace.

"Better is a little with righteousness than great revenues with injustice." (v8)

Solomon lays bare greedy motives bare. I have often said that for some wealth is more of a curse than a blessing. If we love money then it is better that we do not have it. If we love God then He will supply all we need.

"It is an abomination to kings to do evil, for the throne is established by righteousness. Righteous lips are the delight of a king, and he loves him who speaks what is right. A king's wrath is a messenger of death, and a wise man will appease it. In the light of a king's face there is life, and his favor is like the clouds that bring the spring rain." (v12-15)

The Lord cares about how people use the power and authority that they have. The old adage, "Absolute power corrupts absolutely", is a true one.. corruption is imminent when people do not submit themselves to God and others. I have found this particularly true in the church. Senior pastors were removed from their positions in three of the last four churches I have been involved with. I so wish that they would have humbled themselves when elders confronted them.

"The highway of the upright turns aside from evil; whoever guards his way preserves his life. Pride goes before destruction, and a haughty spirit before a fall. It is better to be of a lowly spirit with the poor than to divide the spoil with the proud. Whoever gives thought to the word will discover good, and blessed is he who trusts in the LORD." (v16-20)

I have found that in God's economy humility is not an option.. you either humble yourself or God will do it for you.. and the latter often looks like humiliation. Interesting how evil and pride seem to be linked together.. humility and trusting God also seem to go hand-in-hand.

"The wise of heart is called discerning, and sweetness of speech increases persuasiveness. Good sense is a fountain of life to him who has it, but the instruction of fools is folly. The heart of the wise makes his speech judicious and adds persuasiveness to his lips. Gracious words are like a honeycomb, sweetness to the soul and health to the body." (21-24)

Jesus said that we speak what is abundantly in our heart. It instructs me to do things that will strengthen my heart and make it wise. I think that a good regimen of spiritual food and exercise will give us strong hearts that will speak wise, sweet, judicious and gracious words.

"A worthless man plots evil, and his speech is like a scorching fire. A dishonest man spreads strife, and a whisperer separates close friends. A man of violence entices his neighbor and leads him in a way that is not good. Whoever winks his eyes plans dishonest things; he who purses his lips brings evil to pass." (v27-30)

"Gray hair is a crown of glory; it is gained in a righteous life. Whoever is slow to anger is better than the mighty, and he who rules his spirit than he who takes a city. The lot is cast into the lap, but its every decision is from the LORD." (v31-32)

These verses speak to us about how God sees those who persevere and live temperate lives. I have been a believer since I was 26 but I think that I started to really live a more spiritual life when gray came to my hair.. there is something about age that can mature us spiritually if we persevere with Jesus. My issues with anger began to resolve as my heart became stronger than my emotions.. not that I am anger-free :)

"The lot is cast into the lap, but its every decision is from the LORD." (v33)

A great verse to end the chapter on.. God will always have the last word on our lives.. His grace will always trump our failings.. He decision will prevail.

Please click here to catch some of my other ponderings on the book of Proverbs.
2 comments: