A passage from Lewis' 'Mere Christianity" came to mind as I was out walkin' around in blogdom ... in case you haven't heard it before I thought that I would share it with you: 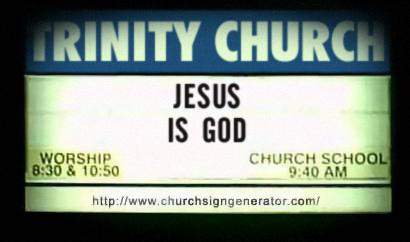 A man who was merely a man and said the sort of things Jesus said [about Himself] would not be a great moral teacher. He would either be a lunatic -- on a level with the man who says he is a poached egg -- or else he would be the Devil of Hell. You must make your choice. Either this man was, and is, the Son of God; or else a madman or something worse. You can shut Him up for a fool, you can spit at Him and kill Him as a demon, or you can fall at His feet and call Him Lord and God. But let us not come away with any patronizing nonsense about His being a great human teacher. He has not left that open to us. He did not intend to.

I just got back from a road trip to New Jersey to celebrate my Mom's 90th birthday. As I was traveling along on Interstate 70, every now and then I would catch a religious billboard that would say "Jesus is Lord" - words stated in several places in the New Testament. For me the billboards came across a bit vague.. I would have preferred "Jesus is God".. it would have been clearer for a nonbeliever.. and might help them with the choices of the Trilemma.