Commenting on Sue's post about people calling folks who don't believe in Jesus as "Christians" I said: Seems like there are two ditches in this area. The first is too narrow and the second is too broad. Some want to define Christianity exclusively to their own group or denomination while others want to include everyone who believes in God. These two verses describe this tension: 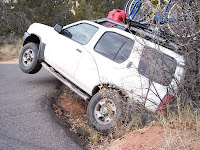 "Teacher," said John, "we saw a man driving out demons in your name and we told him to stop, because he was not one of us." "Do not stop him," Jesus said. "No one who does a miracle in my name can in the next moment say anything bad about me, for whoever is not against us is for us. -Mark 9:38-40

"He who is not with me is against me, and he who does not gather with me scatters. -Matthew 12:30