The Jungle: The Struggle to Survive 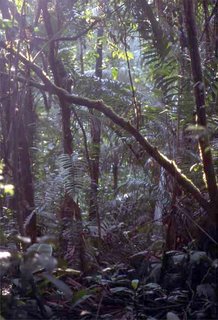 Last week I wrote a post about a vision that I had about a man walking in a jungle. I wrote asking for some feedback and promised that I would share a few of my thoughts on the vision at a later time. I have to say that, a week later, I have a few thoughts about this that I didn't have last week. It seems to me that the vision is a picture of struggle that unfolds in three parts - three separate struggles that I am calling "Three Struggles of the Heart". Here are the struggles as I see them:

Today I would like to discuss the struggle of survival. In the vision I saw a man lost in a dense jungle ... he hacked away at the underbrush trying to find a way out of the jungle. I am not sure that I can portray in words the sense of desperation that I felt as I looked at the jungle through the man's eyes. In a sense life really is a jungle. Listen to this and see if you get a sense of the struggle:

The Song of the Little Hunter

When the heat-cloud sucks the tempest, when the slivered pine-trees fall,
When the blinding, blaring rain-squalls lash and veer,
Through the war-gongs of the thunder rings a voice more loud than all--
It is Fear, O Little Hunter, it is Fear!
Now the spates are banked and deep; now the footless boulders leap--
Now the lightning shows each littlest leaf--rib clear--
But thy throat is shut and dried, and thy heart against thy side
Hammers: Fear, O Little Hunter--this is Fear!

Survival drips with the refrain "It is Fear, O Little Hunter, it is Fear! ". Fear and desperation are the hallmarks of survival. Machetes in hand we all begin trying get our bearings in the jungle ... trying make our way in the darkness ... it is a period marked with desperation and fear. It is in this time when we discover that we have lost our way. We give up on ourselves and no longer trust our ability to 'think our way' out of the jungle.

It is during this time that the Lion appears with a roar. We are initially afraid - after all, lions are scary. The Lion surprises us and speaks to us ... yikes, a talking lion? The Lion is not like us - He is different in every way. The Lion is not afraid of the jungle. He challenges us by His friendship and His desire to show us the way out of the jungle. Everything in our head cries out against the Lion. Our head tells us that He is taking us to His den to eat us ... more fear arises as we ponder the words of the Lion ... how can we overcome the fear? Then ... overcoming our 'rational' fears ... we take a step with our heart ... it is the first step of real survival. It is the first time that we walk with our heart and not our head. It is the first step out of the jungle.