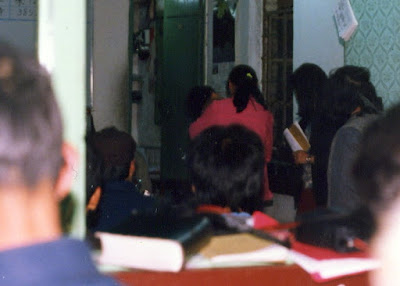 This picture is of an underground church that I visited in China in January 1987.. I selected this one because it doesn't show the faces of these brothers and sisters who had to worship in secret. I guess all of the hubbub of the Beijing Olympics brought back memories of my trip to China so many years ago. So I thought that I might share a few memories about my trip.. not that I remember everything.

Our church was invited to participate in a Bibles for China outreach. The trek began on a Saturday when we headed out for a two day journey to Hong Kong (via Dallas, Los Angeles, Honolulu and Manila) – that was one long trip. When we arrived in Hong Kong our hosts met us and explained the nature of the Bibles for China outreach. Our group of 23 would carry the scriptures into the mainland – but first we would eat. Walking downtown Hong Kong was very strange experience for us – raw skinned chickens, ducks and snakes all over the place. Besides all of that we were just not used to all of the people.. it did remind me of my home city of New York in some respects :)

For a few days we lived in a suburb of Hong Kong with a missionary couple. In the mornings we would pick up gym bags full of bibles and shuttle them via van, bus or train to a staging area in a Chinese border city. The gals would often wear long skirts that had inside pockets for small new testaments - they said that they were very heavy.. I know those gym bags had me wishing that I trained with weights when I was stateside.

Each time we crossed over the border we had to go through a random checkpoint where our bags would be examined. Both times that I crossed carrying two bags and I got through without being checked – guess the Lord was watching over me.. I just acted lost and dazed.. not a hard act for me.. and the guards let me pass. Only one of us got checked and they just had their bibles confiscated.

Our journey to mainland China had an amazing start. We were transporting our bags from the storage facility and it seemed that we had a few too many bags (we estimated the combined weight to be about 1,000 pounds) for the journey and was keeping the train from leaving on time. A few Communist Chinese guards came over and we thought that the ‘jig was up’! To our amazement these guards began to help us load our bags on the train. That made for great conversation on the train - all of the way to our destination city we sat in amazement at God's provision. When we arrived we brought our bags with us as we checked into a hotel.. from there the bags were transported by others to places further into the mainland.

I remember how we were taken by our hosts to the underground church. I am humbled by the simple, sincere and courageous faith of these newfound brothers and sisters. An older man spoke in Mandarin for about an hour (with no English translation) as he taught the scriptures to his flock. I found out later that I was listening to a true hero who was jailed for his faith for 20 years under the Mao regime. Thinking back on this group I must say that I feel humbled to have had a chance to spend some time with them.

After that visit our group spent the next few days traveling the countryside on a bus.. sharing stories.. singing songs.. and worshipping Jesus together. Our journey ended with a hydroplane boatride from Macau to Hong Kong. By the time we returned to Hong Kong most of us were experiencing a sense of both exhilaration and exhaustion. Our plane would leave the next day for Manila where our adventure continued.. maybe I'll tell that story another time.